Despite the complications of the current pandemic caused by severe acute respiratory syndrome- coronavirus-2 (SARS-CoV-2), other infections and outbreaks caused by different microorganisms still exist. These may even pose a higher risk than previously reported, as all the medical attention and research efforts are being focused on fighting coronavirus disease-19 (COVID-19), providing opportunities for other pathogens to thrive and evolve. However, the persistent and continuous efforts that have been employed into improving infection control practices as a result of this pandemic, may actually reduce the rates of other nosocomial infections.

Hospital-acquired infections, also known as healthcare-associated infections (HAI or HCAI), are nosocomially acquired infections that are typically not present or might be incubating at the time of admission. These infections are usually acquired after hospitalisation and manifest 48 hours after admission to the hospital. The infections are monitored closely by agencies such as the National Healthcare Safety Network (NHSN), National Institute of Health and Care Excellence (NICE), and the Centre for Disease Control and Prevention (CDC). According to NICE, 300,000 people are diagnosed with HCAI in England only every year, costing the NHS an estimate of £1 billion yearly. This could be due to contamination of equipment and other materials or cross-contamination within the hospital. In this article, we will shed light on the different infections acquired in the hospital setting, and their corresponding pathogenic microorganisms.

Pneumonia is an infection of the lung tissue. It affects the air sacs (alveoli) of the lungs, which fill with microorganisms, fluid and inflammatory cells, impacting their normal function. Pneumonia is a common condition, affecting 8 in 1,000 people each year in the UK. It can affect people of any age but can be more serious for the very young or the elderly. Hospital-acquired pneumonia affects 0.5% to 1.0% of hospitalised patients and is the most common healthcare-associated infection contributing to death.

Sepsis is a clinical syndrome caused by the body’s immune and coagulation systems being switched on by the presence of an infection (bacteria, viruses or fungi). Sepsis is one of the most common causes of death among hospitalised patients in the intensive care unit (ICU). Septic shock is a life-threatening condition that is characterised by low blood pressure despite adequate fluid replacement in addition to organ dysfunction and sepsis. The UK Sepsis Trust estimates that 37,000 people die from sepsis in the UK every year. The most common causes of sepsis in adults are pneumonia, bowel perforation, urinary tract infection and severe skin infection.

The UK Sepsis Trust cites Hospital Episode Statistics (HES) data suggesting the recorded incidence of sepsis is rising by about 11.5% each year, with 141,772 cases per year recorded in 2014–15. It notes this is likely to be an underestimate of true incidence, with an estimate of at least 250,000 cases of sepsis each year in the UK being more representative.

Globally, the largest contributors to sepsis cases and sepsis-related mortality across all ages were diarrhoeal diseases (9.2 to 15 million annual cases) and lower respiratory infections (1.8-2.8 million annually) reported in 2017. However, non-communicable diseases are on the rise; one-third of sepsis cases and nearly half of all sepsis-related deaths in 2017 were due to an underlying injury or chronic disease. Maternal disorders were the most common non-communicable disease complicated by sepsis. the most common causes of sepsis-related deaths were neonatal disorders, lower respiratory infections, and diarrhoeal diseases. Group B streptococcus is the leading cause of both neonatal and maternal sepsis, though E.coli is an emerging threat. Both of these pathogens have displayed considerable resistance to treatment and are considered priority pathogens for research and development of new antibiotics.

Clostridium difficile (C.diff) is now recognised as the leading cause of health-care-associated infective diarrhoea and is increasingly being linked to community-acquired cases of colitis. C. diff can be found in the intestinal tracts of both humans and animals, but its spores are also ubiquitous in the environment and can be remain infective on contaminated surfaces for a long period of time, as well as being the most resistant to disinfection. C. diff bacteria are found in the digestive system of about 1 in every 30 healthy adults. The first European Centre for Disease Prevention and Control (ECDC) point-prevalence survey in 2011 and 2012 estimated that ~124,000 patients developed health-care-associated CDI within the European Union each year including the UK. The primary mediators of inflammation in C. difficile infection (CDI) are large clostridial toxins, toxin A (TcdA) and toxin B (TcdB), and, in some bacterial strains, the binary toxin CDT. The toxins trigger a complex cascade of host cellular responses to cause diarrhoea, inflammation and tissue necrosis — the major symptoms of CDI.

Uncomplicated UTIs typically affect women, children and elderly patients who are otherwise healthy. Complicated UTIs are usually associated with indwelling catheters, urinary tract abnormalities, immunosuppression, or exposure to antibiotics. The most common causative agent for both uncomplicated and complicated UTIs is uropathogenic E.coli (UPEC), accounting for almost 75% and 65% off all UTI cases respectively. For uncomplicated UTIs, other causative agents are (in order of prevalence) Klebsiella pneumoniae, Staphylococcus saprophyticus, Enterococcus faecalis, group B Streptococcus (GBS), Proteus mirabilis, P.aeruginosa, S.aureus and Candida spp. For complicated UTIs, the other causative agents are (in order of prevalence) Enterococcus spp., K. pneumoniae, Candida spp., S. aureus, P. mirabilis, and P.aeruginosa. Acute UTI occurs in up to 50% of women and estimates suggest that by the age of 24 years nearly one third of females will have had at least one episode of cystitis.

As a final thought, these harmful infections could arise as a result of poor adherence to cleaning protocols, hand hygiene or not implementing alternative interventions such as automated disinfection technologies. As it was shown numerous times in the literature and peer-reviewed papers, manual cleaning only is not sufficient to eliminate contamination at a safe level for patients and staff. Implementing infection control and prevention measures that include the use of automated no-touch technologies such as UV-C light and hydrogen peroxide vapour alongside manual cleaning will improve outcomes and reduce rates of infection. One of the proposed solutions in combining manual cleaning and hydrogen peroxide vapour technology, is the use of Patient Equipment Cleaning Centres (PECC) to contain and significantly clean patient equipment. Here, my colleague Enrico Allegra discusses in detail patient equipment contamination and how we can solve this issue with PEC centres. 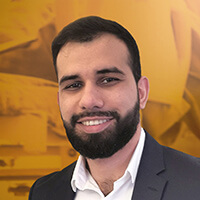 Mohanad has over 4 years of deep knowledge and understanding in microbiology, immunology and infection control. He graduated with a Bachelor in Science degree in biomedical science, followed by a master’s degree in microbiology. He has worked closely on a variety of pathogens such as MRSA, P.aeruginosa and campylobacter jejuni and tested the efficacy of different antimicrobials and disinfectants against them. Also, he worked as research scientist at Kingston University during his postgraduate studies and sequenced the DNA of unique Micromonospora strains and analysed their genome using bioinformatics. He operates as the technical writer at Test Labs, researching evidence-based materials and delivering written scientific and marketing content.